How Does A Solar Generators Work?

Solar energy is widely used in every aspect of our life: in the natural lighting of premises, heating water, drying, and sometimes even in the preparation of food. However, the most crucial use of solar energy is perhaps the generation of electricity. And the main element of this generation is a solar battery!


The revolution in the use of photocells occurred when the first element on silicon was created in the depths of the Bell Telephone Laboratory. The company needed a power source for telephone exchanges and could be said to be the first company to use an alternative source of solar energy which later led to the creation of top solar generators. But how do they actually work?

Solar energy generator consists of photocells, connected in series and parallel. All photocells are located on a frame of non-conducting materials. Such a configuration allows the solar panels to collect the required characteristics (current and voltage). Besides, this will enable you to replace the failed photocells with a simple replacement.

The principle of operation of photocells from which the solar battery is based on the photovoltaic effect. Alexandre Edmond Becquerel observed this effect in 1839. Subsequently, Einstein’s work in the field of photoelectric allowed to describe the phenomenon of quantitatively. Becquerel’s experiments have shown that the radiant energy of the sun can be transformed into electricity using special semiconductors, which later became known as photocells. 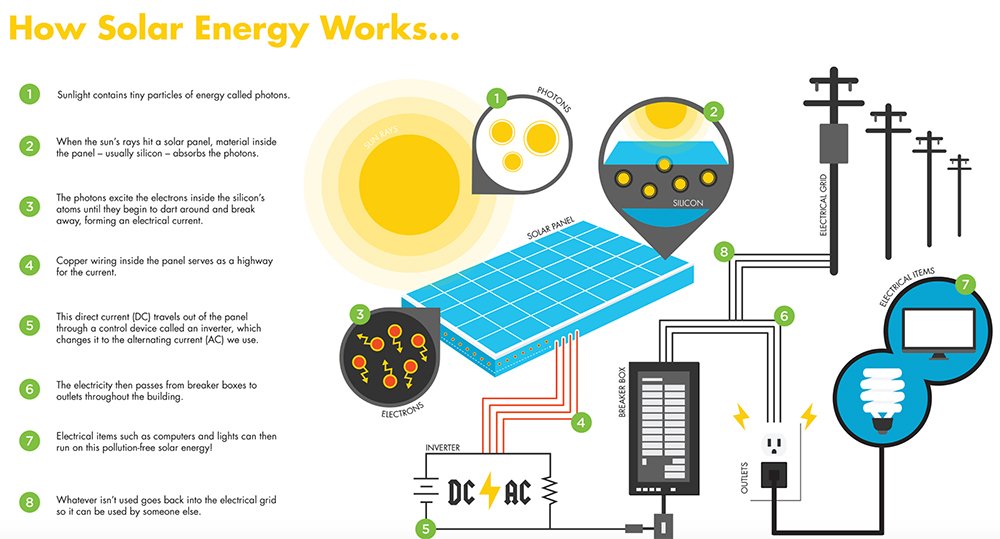 Generally, this way of getting electricity should be the most effective, because it is a one-step method. Compared to another technology for converting solar energy through a thermodynamic transition (Sun rays -> Water heating -> Steam -> Turbine rotation -> Electricity), less energy is lost to transitions.

However, the potential difference created by one photocell is small for industrial applications. That is why solar cells have been created. Also, the photocells are covered with various protective layers of glass, plastic, multiple films. This is done in order to protect the fragile element.

The central performance of a solar cell is the peak power expressed in watts (W). This characteristic shows the output power of the battery under optimum conditions: solar radiation 1 kW / m2, ambient temperature 25 ° C, solar spectrum 45 ° wide (AM1, 5). In normal circumstances, achieving such indicators can be extremely rare, the illumination is lower, and the module heats up (up to 60-70 degrees).

Due to combining photocells consistently, we increase the difference in potentials, connecting in parallel and get the current. Thus, combining the connection can achieve the necessary parameters for current, voltage and power. In addition, consistently or in parallel, you can combine not only photocells within a single solar cell but also sun powered generator in general.